Yesterday was Emma’s birthday.  Unlike most little girls turning 7, she didn’t get to have a little party with her friends, or go to a movie or whatever else she would want to do, instead she came to the hospital.  On one hand, it was very sad for us that she didn’t get to have a normal birthday, but on the other hand I told April she will always remember this birthday.

Here’s the birthday girl who turned 7 except she looks 17 with her little fake fashion glasses and all I can think is that I will be in trouble in a few years. 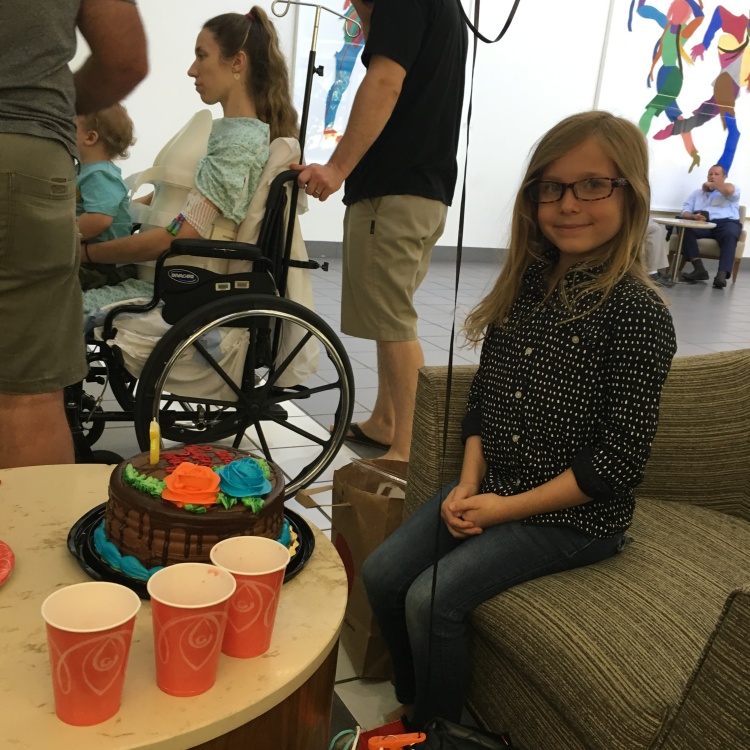 We had all the kids come visit, as well as, my parents and April’s parents.  Near April’s unit is a large open area with tables and a view of the garden, so that is where we decided to hang out.  All the kids were there as I rolled April out in her wheelchair and she lost it immediately upon seeing them, which ended up scaring Nick and Will for a little bit until April was able to calm down and put on a happy face.  Will was the first of the boys to come to April and give her a hug and sit in her lap, but Nick took a little while.  I think seeing her in this strange chair with wheels, wearing this big back brace, wearing strange clothes, and she was crying so it put him off a little.  I ended up putting him in her lap facing outwards so I could push them around like a ride and then he started smiling and was fine.  After the ride he then stood on her lap and gave her hugs and kisses saying “momma, momma” and April was so happy. 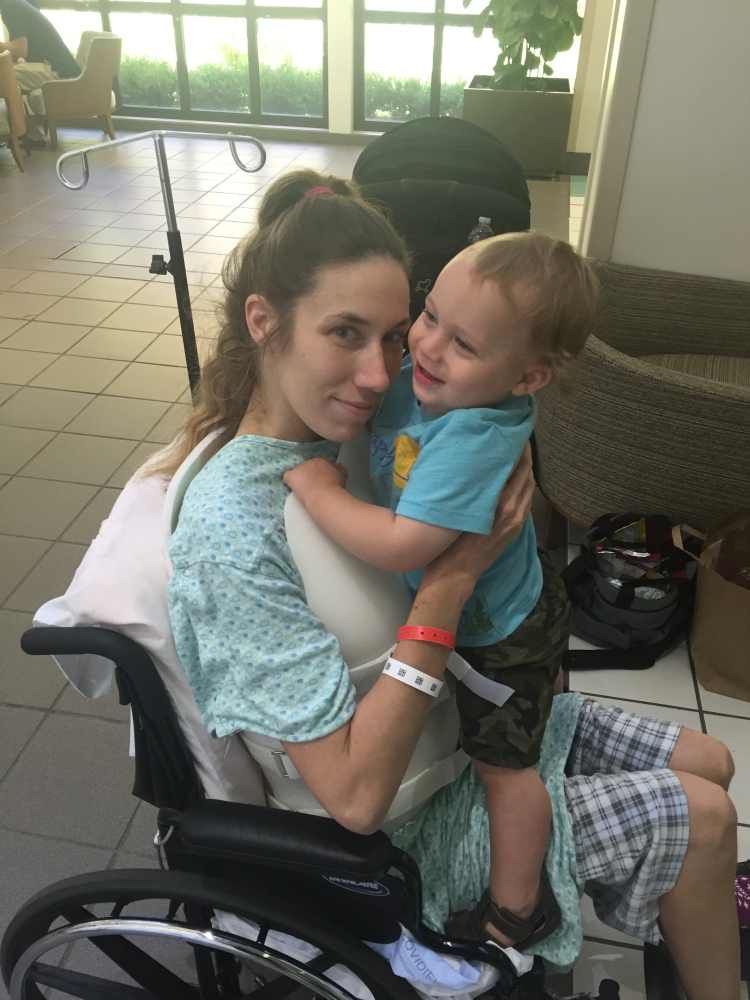 Our parents brought all the presents, cake and soda for the “party.”  Emma wasn’t phased and had no problem opening up her gifts and loving all of them.  The boys, without fail, did not care where they were and ran around, but fortunately weren’t yelling and screaming, so they kept the raucous to a minimum. 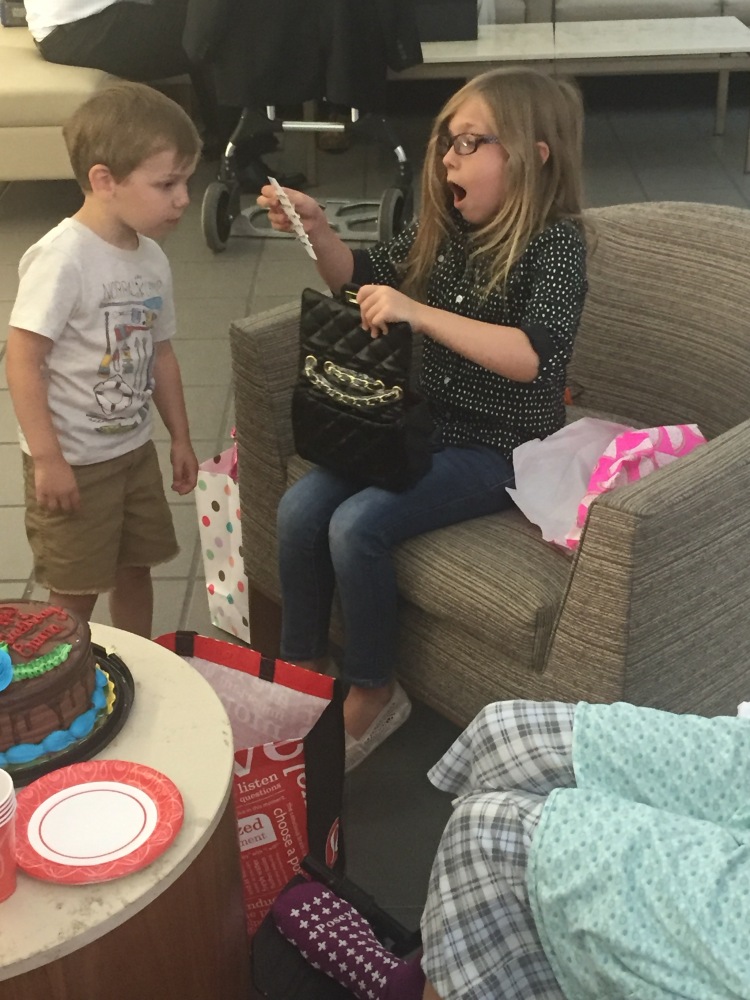 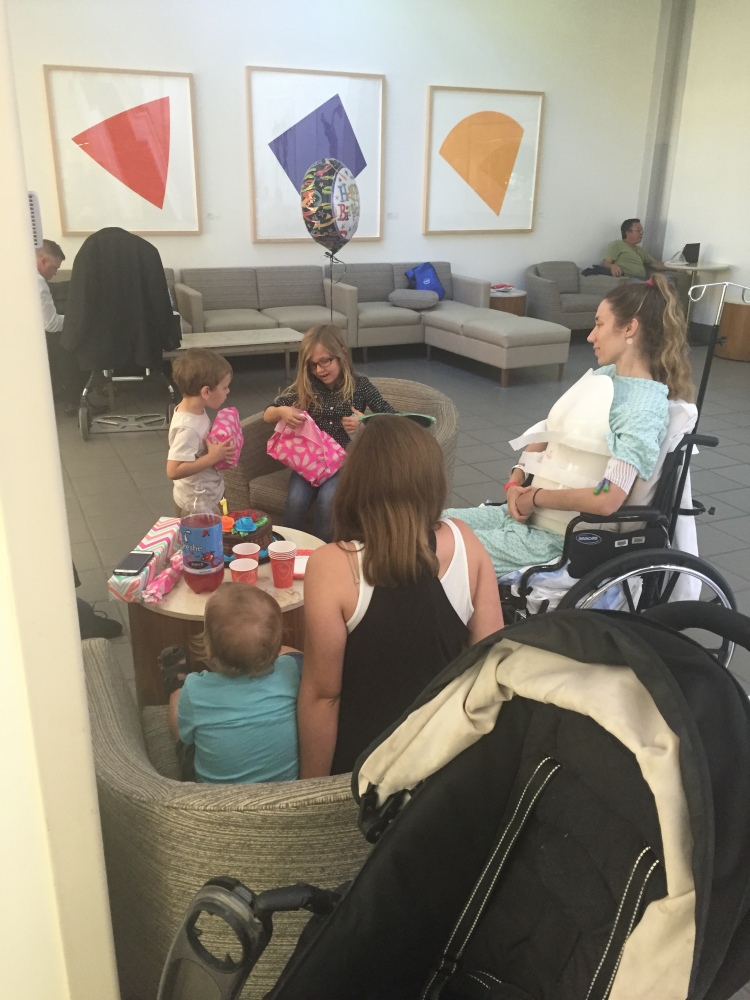 After an hour or so of hanging out everyone came back to our room to see what Mommy’s room looked like.  April’s back was in some pain since she had been sitting up for about an hour, so she got back into bed and Nick was so excited that she was laying down he was trying to get out of my arms to her.  I let him lay in bed with her and he instantly layed on her hugging her.  Will, of course, then wanted up so I let him up into bed with April.  Big smiles all around.

Unfortunately, all good things must come to an end and all the kids had to leave.  It was a bittersweet visit, all the joy of seeing them and all the disappointment of them leaving and still being unsure when she will be home.  Hopefully we are less than two weeks away from being home.  April cried as Will hugged her and told her in his little boy voice, “luv you mom, miss you mom.”  I wish I had it on video.

After everyone was gone it was back to work.  Physical therapy came by and they wanted to see how April and I worked together, since we will need to rely on each other more than ever.  I had to show them that I know how to appropriately put on her back brace, how to help her up out of a sitting position to standing up to a walker, where to stand while I walk next to her and her walker, and for the first time how I assist her to get up stairs.

This was the first time April was asked to try the stairs, so she was a little gunshy about it.  The physical therapist showed her the proper way to tackle the stairs then it was her turn to try, with my help assisting.  April was very impressive and was able to do it.  She holds onto the rail on one side and I hold her opposite hand with one hand and with my other hand assist her arm so she can lean on me.  After the stairs she took a walk around the unit and by the end of that her hips, legs and back were on fire so it was time stop.  She got back into bed and iced her back.  At this point it was early evening so April ordered dinner and it was time to take it easy and think about what’s ahead.

Today April is due to be discharged and transported to rehab.  Finishing the first part of this journey and heading on to the next.  We do not know how long April will be at the rehab facility, but it is for the best. They will be able to provide all the exercises and skills training she will need to get back to a somewhat normal life.   In order to get to the rehab facility April is going to have to ride in a gurney van, basically like an ambulance.  I had arranged it so the van would get here by noon, which would be perfect.  Enough time to get ready and enough time before the crazy Friday afternoon and early evening traffic.  Of course 15 minutes before they were supposed to get here we received a phone call from the transport that they will be here at 1, and of course they showed up at 2 and we were on our way at 2:15 putting us in the thick of Friday traffic.  Instead of an easy hour long drive strapped to a gurney, it took 2 hours. 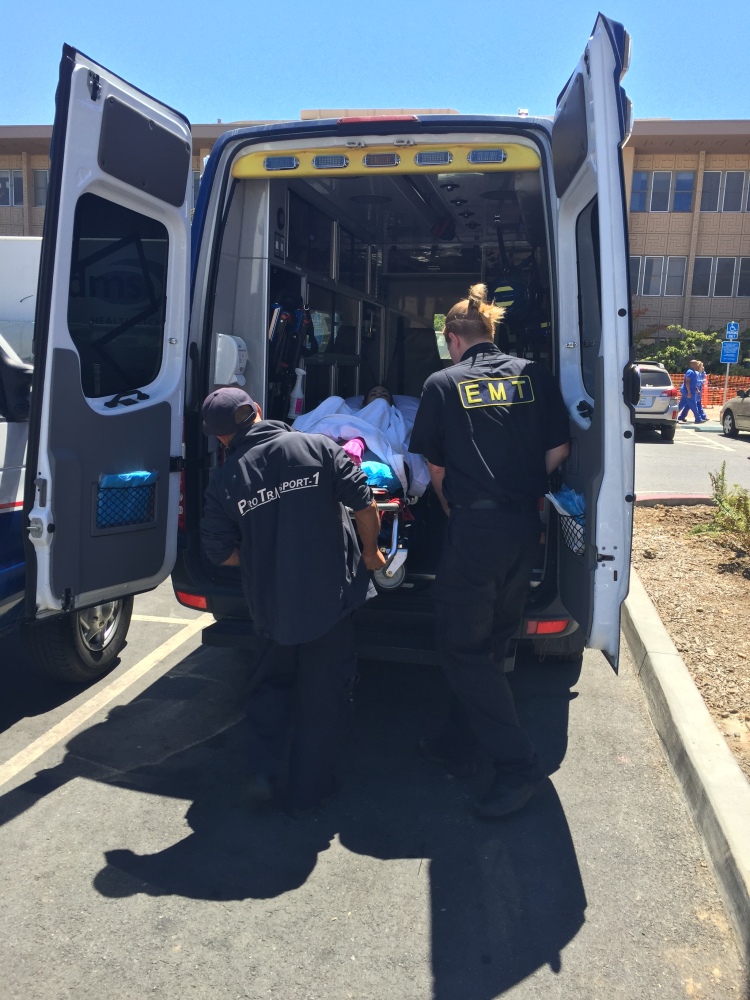 When we arrived April’s pain was getting pretty bad. Since we left so late and were stuck in traffic she missed her pain meds.  Our room is nice though, it has a big window with a lot of sunlight, unlike our previous room which was like a cave.  It is nice being back in Livermore close to home, but it’s still not home.  April is pretty bummed right now being so close to the kids, but not with the kids.  She doesn’t want to be here at all.  I think it’s because here there aren’t any distractions from why she is here.  She isn’t here to just heal, she is here because of her leg.  Here she has to come face to face with the problem and try to solve it.  Everyday will be tough, but everyday she will get stronger and one day closer to coming home.  On the brighter side, we are closer to food and won’t have to only eat cafeteria meals.  As soon as she had her pain meds on board she sent me out to get real food and that’s what we are doing right now, eating real food.

8 thoughts on “The Next Step, Literally”