Here we are again in the same familiar place with me hijacking April’s blog to give an update on what has happened since I left everyone last night.  So yesterday April was moved up to what they call a post surgical diet 2 which includes all liquids, some raw fruits, raw veggies, crackers, pudding, and some meats like chicken or turkey.  April took it easy only eating a few bites here and there making sure not to overdo it.  Later in the evening though, April became extremely nauseated and vomited.  She vomited 650ml of fluids and bile.  650ml is quite a bit, over half a liter. The other problem was that she had taken her meds no more than a minute before so most of them came up, but if the nurses can not find the pills or see them they have to assume they stayed in April’s stomach.  After this she was only allowed sips of water with her meds.  She slept ok through the night usually waking up every two hours or so in pain.  So I did our ritual of helping put her in a new position and stuffing pillows in the appropriate areas to keep her back straight.

At 6am the spine team came and rounded on April like they do everyday.  Not much to say, “yes I cannot feel my leg, no I don’t feel you touching there, etc..”They checked her spine incision and went on their way.  At 7am the colorectal team rounded on April.  This one I was more concerned with at this point.  I voiced my concerns about her throwing up and how she has lost at least 20 lbs since she has been here and no one has even weighed her even though I have asked numerous times.  I also told them she needs a PICC (peripherally inserted central catheter) so that she can receive TPN (total perenteral nutrition).  They said it is early for the PICC and we will wait and see and that she was now strictly to have nothing to eat or drink.  At 730am the pain team rounded and disconnected her lidocaine IV and said that the whole pain team will come by later to talk.

After sitting around for awhile and letting her rest she suddenly woke up yelling, “bucket bucket” so I rushed over and she began vomiting again, and she vomited a lot again.  This time the she threw up pure bile, thick and green and 700ml of it.  This means she threw up 1 1/2 liters in about 12 hours. I told the nurse to call the colorectal doctor, which she promptly did.  The doctor came down to check things out and said nothing by mouth anymore.  I told her I thought she was beginning to look destended again.  She ordered an abdominal X-ray and for her to have a NG (nasogastric) tube placed. Also she said they would now get the ball rolling on the PICC line, probably because before she came down to see Aptil I saw the nutritionist and she was onboard with a PICC just because you can see how emaciated April is.

At 11 am the entire pain team came to talk with us.  They wanted to discuss pain options since April will not be able to take anything by mouth with the NG tube in.  They decided since dilaudid caused April to have intense hallucinations and nausea they would try fentanyl and turn her lidocaine back on at a little higher dose.  Going forward a fentanyl patch may be ordered to help as well depending on how she reacts tonight.

At 1230 the X-ray was rolled into our room and two pics of April’s abdomen were taken.  The colorectal doctor said that there is an ileus but since April is making BMs everything should be okay. This felt like Deja Vu though because April’s belly is starting to look distended again. She said the NG tube will help as well as not eating or drinking.

When 2pm rolled around there were four nurses in the room.  Two of the nurses are what they call crisis nurses and they came to take out the old IV and put in a new one to hook up her new lidocaine and fentanyl.  One of the crisis nurses even asked why doesn’t she have a PICC line in yet. The other two nurses were the floor nurses and they were getting things ready for April’s NG tube placement.

If you have not seen the placement of a NG tube you should go check one out on YouTube, they are very uncomfortable and make you feel like you are choking plus there is a tube in your nose going to your stomach. The NG tube basically sucks out all of the gastric juices and bile in your stomach until everything in your digestive systems calms down enough to try some water or other liquids. During April’s NG tube placement she threw up as well.  The tube was in her nose and down her throat in her stomach and she started to throw up.  She threw up 500ml of bile and once the NG was hooked up to suction it filled the canister to 300ml.  Currently there is 550ml in the canister which means in under 24 hours about 2 1/2 liters of bile and other fluids have either been thrown up or sucked out of April.  Then an hour and half later April threw up some more even with the NG tube in, this is not a great. 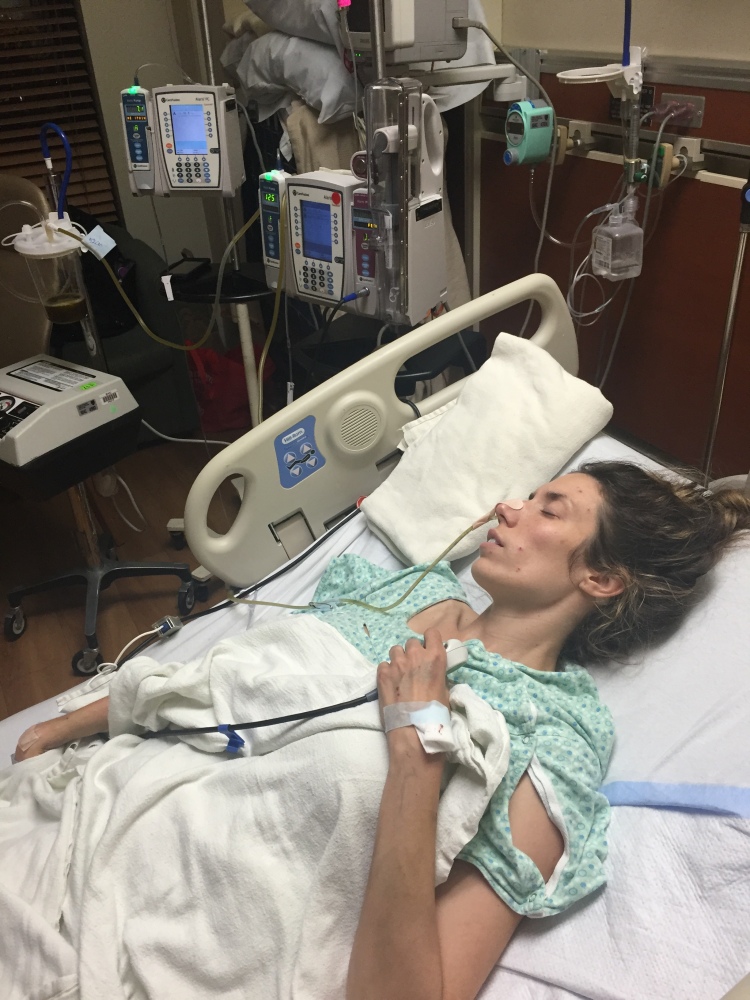 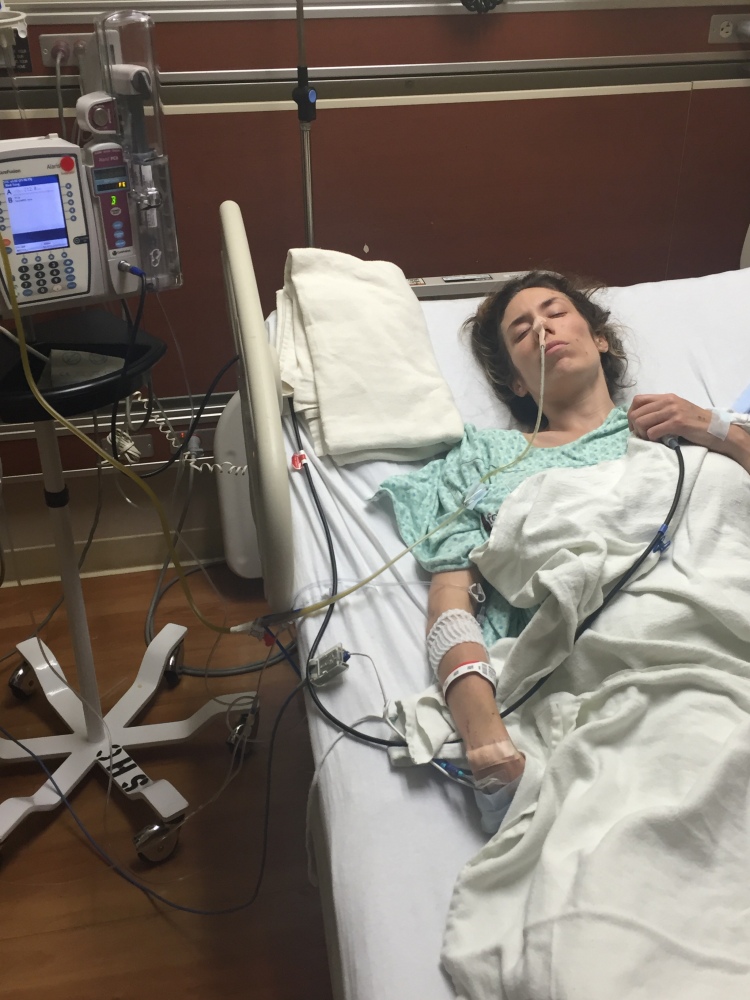 Another nurse, who specializes in PICC lines, came around 530pm.  A PICC line is a steril procedure. First the nurse uses an ultrasound machine to find the vein she wants to go after, above the elbow on the inside of the arm.  April’s arm is then cleaned and prepped and a needle is inserted into the vein.  Once she is confident the needle is in the right spot she make a stab incision then inserts a guide wire.  Over the guide wire goes a sheath and once she has confirmed the sheath is inside the vein the wire is taken out.  Then a soft flexible catheter is put into the sheath and into the vein.  This catheter travels through this vein and into a large vein in the chest and into the vena cava which is a massive vein near your heart.  This is placed there so when the TPN goes in it can easily be dispersed throughout the body. The procedure took about 30 minutes and was not to uncomfortable for April. 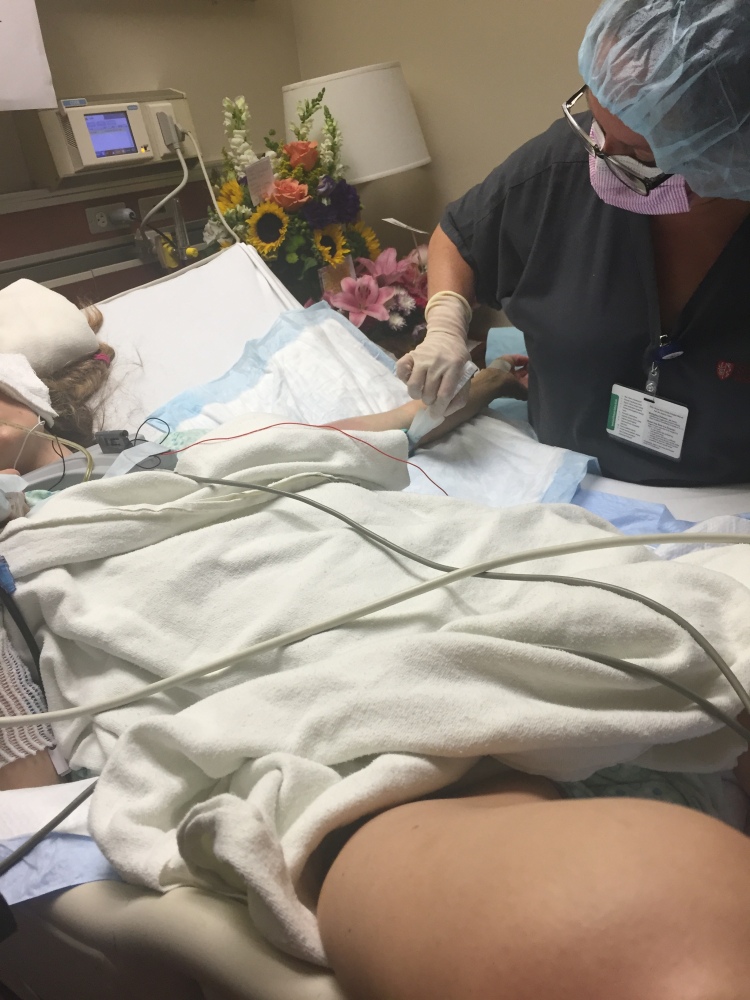 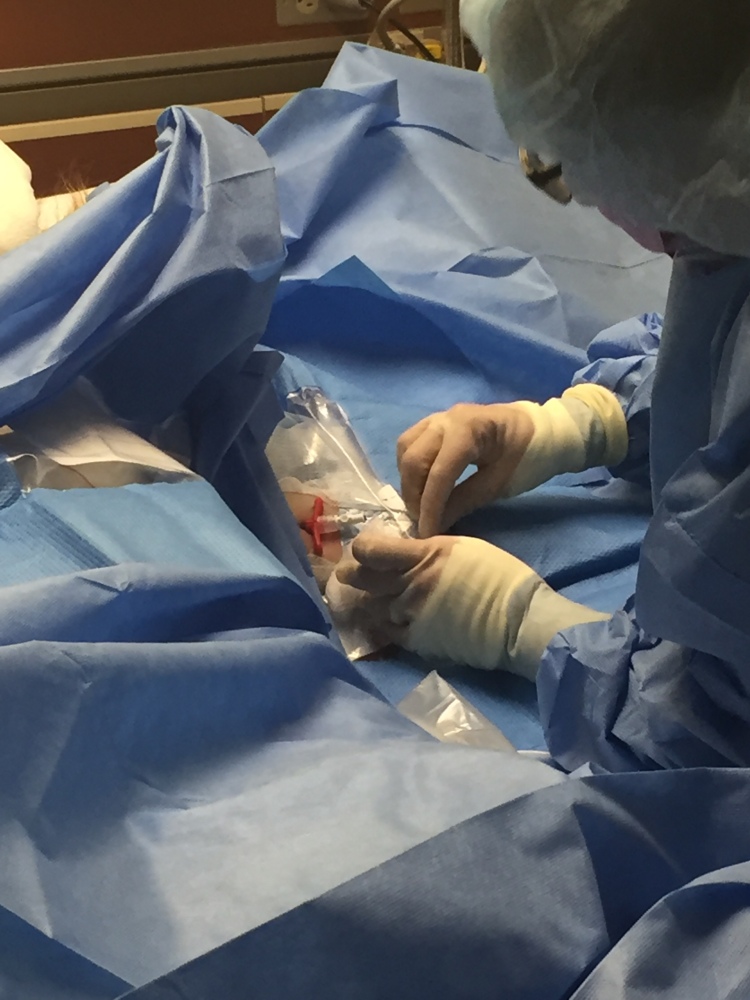 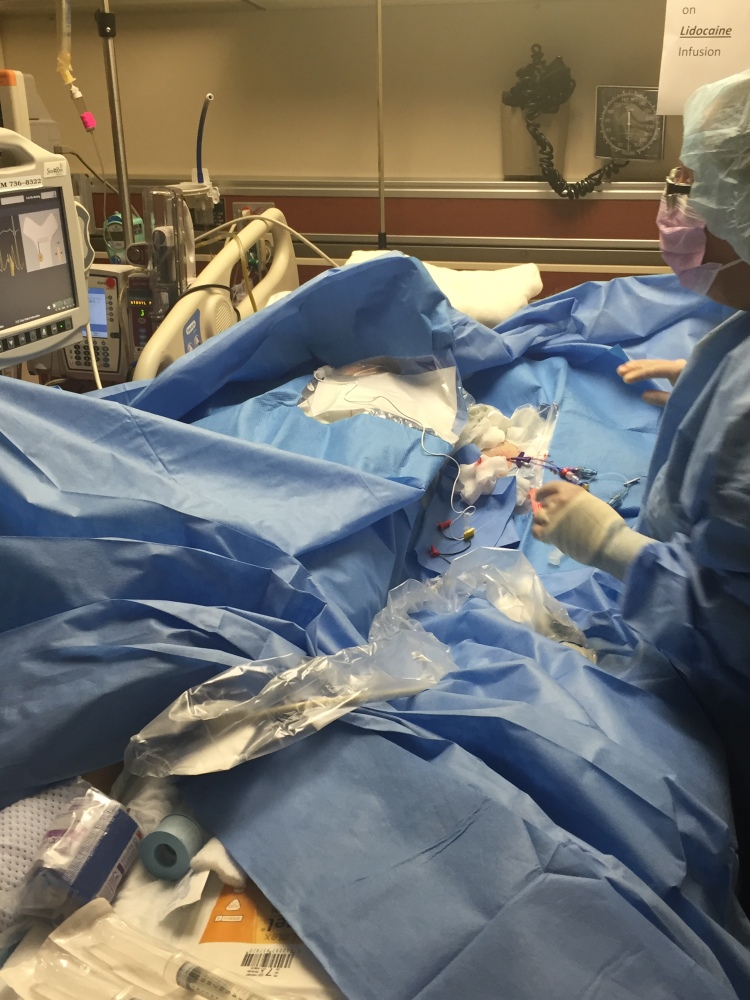 This brings us to now, I just got off the phone with the colorectal doctor who heard April is still throwing up.  I voiced my concern about her being blocked up again and she said well ya she is kind of blocked up because she has an ileus in there.  So I asked how is the same thing not going to happen? She said they will be keeping a close eye and since there is the NG tube and April is starting to have BMs it should be okay. Not very reassuring to hear.

So essentially we are back to square one except maybe a little worse.  April can not drink or eat, is constantly throwing up and looks completely emaciated.  This means no physical therapy because how can u get up and exercise when you can’t even eat or drink and you literally have nothing in your body and zero energy to move.

Anyways tomorrow is, well tomorrow and I have no freaking clue what to expect next.