April is sleeping and my mind is racing.  Now that April is well, as in she is alive and is in no current danger, what is next.  Next, obviously is healing.  The easy part will be her healing from her incisions, the disecting through muscle, the rods and screws being placed in her back, the osteotomies that literally ripped her vertebrae apart to make her spinal column flexible enough to straighten, and all the other normal things associated with Scoliosis surgery and colectomy surgery.  The hard part will be learning how to walk again, coping with the mental toll of not being able to use her left leg, not seeing her children, and in general just not knowing what is going to happen in the future.  April last saw our two youngest children, Will and Nick, on the 4th of July.  We aren’t even sure when she will be discharged from here, and when she is finally discharged April won’t be able to go home, she has to go to a live in rehab facility.  So who knows when she will actually be home.

Everyone, including myself, says “oh everything will be fine, it is tough but you will get through it” and all the other cliches that we all use trying to make someone feel better.  The truth of the matter is, right now April does not have the ability to walk on her own.  Her left leg is literally just a leg to stand on and even standing she can’t feel her leg.  She is not technically paralyzed in the medical sense of the word because she is able to move her leg and foot, but she doesn’t know how or where she is moving it or what she is doing with her leg and foot. She has sensory damage.  She can move but has no feeling, even to the touch.  When April stands she has no sensation of her left leg, she can not feel her foot touching the ground, she can not feel if her knee is bent or straight and when she tries to take a step her leg is flung around or she moves it in a very shaky unsturdy way and guided by a physical therapist.

Now it is early.  It’s only been a little over a week, but her leg has been pretty much the same since she woke up.  How did this happen?  Well, I was told during the decompression portion of the surgery somehow they damaged April’s spinal cord.  All the doctors say they are optimistic, but what are they going to tell you while you lay in a hospital bed in agonizing pain, “there’s no hope.”  The no hope part probably comes out of their mouths later when their patients themselves have come to terms with what’s going on.  I’m not trying to say there is no hope, I think there’s plenty of hope and I am confident she will walk again, but at what degree or in how long I don’t know.  Unfortunately, this has happened to April, but it has also happened to her family.  Unfortunately, we have no idea how she is going to be in a month, two months, or a year from now, but I do know this recovering process will be slow and torturous for all of us, and especially April.

What do we do for now?  Now (and forever), I just keep positive and strong for my wife and kids and try to get through the nightmare.  Constantly in my head are all the possibilities that use to seem crazy, but now are much more of a possibility.  How do I go back to work? How can April be home with the children in the future?  How do I restructure our entire life in order to make all of this work?  Do I some how find a permanent nanny/nurse?

I feel like this is an extremely negative post and I don’t want anyone to think I am only thinking of the negative things or giving up and that I have no hope.  It’s just that we all try to think of the positive and that everything will be fine and work out, but I have to think about some of the reality and how to reorganize our lives to get through it all.   I have tons and tons of hope and faith that April will be fine because I know she is strong and an extremely determined person, but it may take a long time, at least it will take a lot longer than if the surgery went as expected.

To put it simply I am terrified.  Terrified that my wife is now disabled and not knowing for how long, terrified of how my four children will cope or understand, terrified how I am going to cope and not knowing what/how/when to do things – like do we need some sort of government aid for people with disabilities, live in help, childcare, how do I go back to work, her work, does my work have any help or programs they can offer, do I need to make a bedroom downstairs and will she need a special walker or special commode – all of these things plus a million more that will come up later, and I’m mostly terrified for April and how she is going to do.  If I feel like this I can’t even wrap my head around how she is feeling. 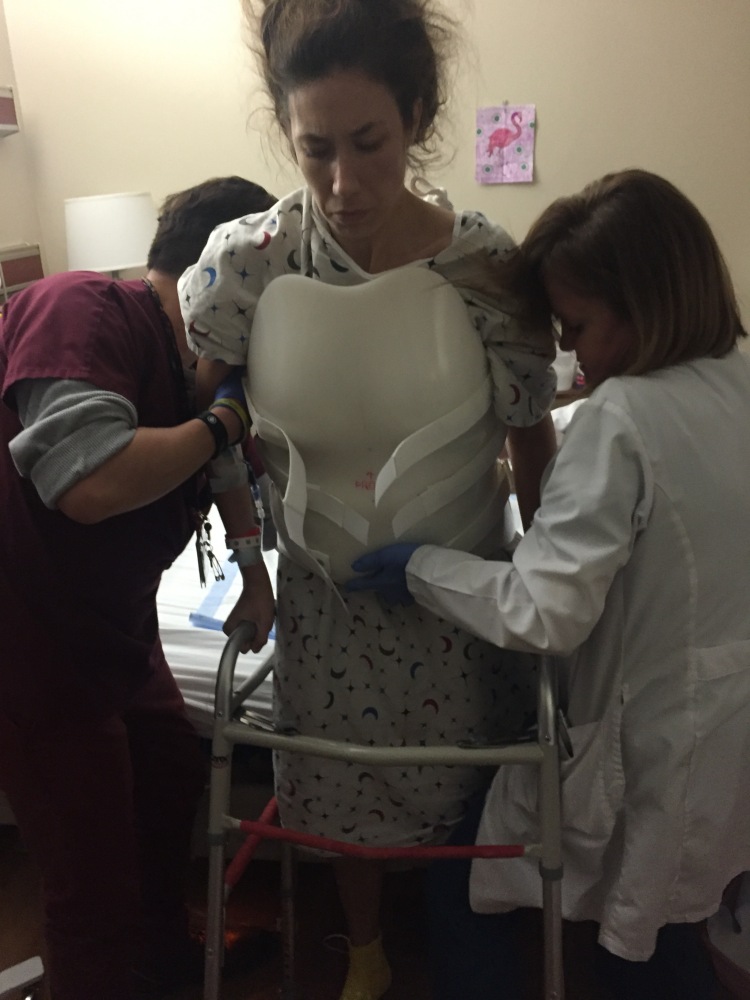 17 thoughts on “The Unknown”